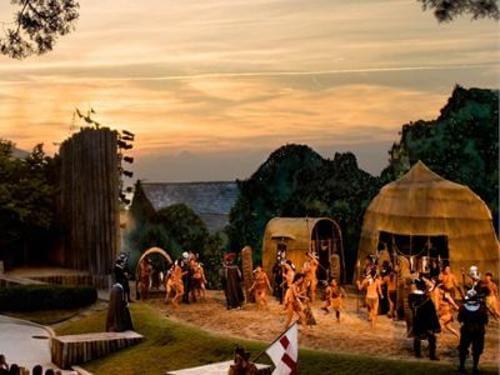 Millions have seen the compelling story that celebrates the 117 English men, women, and children whose dream still lives on in this American original. First staged in 1937, it is the nation’s premier and longest-running symphonic drama. Written by Pulitzer Prize-winning playwright Paul Green, The Lost Colony is the “grandfather” of all outdoor dramas and is produced by the Roanoke Island Historical Association (RIHA), a non-profit whose mission is to celebrate the history of the first English colonies on Roanoke Island, North Carolina, and to honor the founders of The Lost Colony symphonic drama through drama, education, and literature.

For 19 days each May over 200 actors, technicians, designers and volunteers rehearse to bring The Lost Colony to life for another summer season. The production is enormous. The stage itself is over three times larger than most Broadway stages in New York. You will be seated in the center of the stage area with action happening on three sides of you and even sometimes right next to you in the aisle. Come see epic battles and Indian dances. Experience the sorrow and heartbreak of tragedy and loss. Witness the pageantry of the Queen and her court and celebrate the birth of Virginia Dare. There is music, laughter, romance and dance.

Hours of Operation:
May 31st thru August 23rd at 8pm Nightly